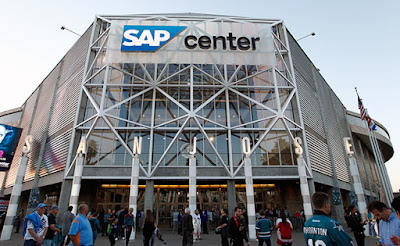 San Jose, CA--After eighteen hours of intense negotiations, recording artist Andrea Bocelli and the NHL's San Jose Sharks came up with a compromise to the scheduling conflict at the SAP Center for Saturday, June 4. Bocelli is scheduled to perform at the nearly 18,000-seat arena on this night, but the deep playoff run by the Sharks into the Stanley Cup Final--their first-ever appearance--now has the team hosting the Pittsburgh Penguins on the same date. The two sides have agreed to both play in the center on the same night. At the conclusion of the second period, hockey fans will exit the building to make way for Bocelli concert ticketholders. The Italian tenor will play for thirty-five minutes, then, after a likely extended encore, the SAP will be emptied again for Sharks fans to re-enter for the third period. "It will probably be about an hour and fifteen minutes of intermission time," said one nervous NHL official. "It's going to be tricky, but we'll pull it off."