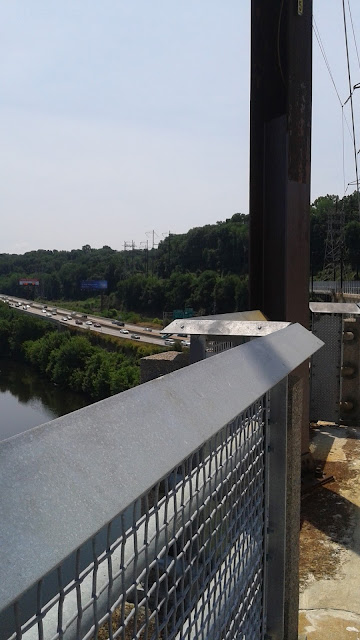 Phila., PA--The challenge of keeping a fish on a fishing line during the long, nearly 20-plus minutes it takes to reel a catch in from the surface of the river to the top of the bridge has drawn anglers from across the region to the almost one-year-old trail bridge. (The rail bridge was built in 1918.) "It's not the catching of the fish that brings me here," said Dan Bayles, 37, from Wellsboro, PA. "It's keeping the carp or catfish or whatever's on the hook, well... on the hook while I reel it in." Planners from both sides of the Schuylkill did not anticipate the popularity of fishing from the bridge. "It's just too damn high," said Porter McLaughlin, a transportation planner for Philadelphia's northwest neighborhoods. "You're not even allowed to fish from the bridge. It's just too damn high." The first annual Manayunk Bridge Fishing tournament will be held over the weekend of September 17-18, 2016. "Anyone caught fishing from the bridge will be prosecuted," said Captain and Second Lieutenant, Adrian Sillenger of the Manayunk Police Department.