Toilet paper orientation: over or under? Sign sparks heated debate, confrontation in stands 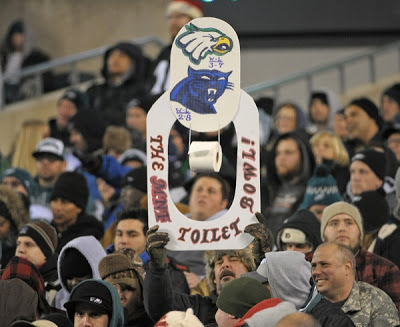 Above: A disgruntled Eagles fan, who is also a proponent of the over method of toilet paper dispensing, demonstrates his displeasure for the team's putrid season at last Monday's nationally televised game against the Panthers. The sign also taught the fan a lot about the green-clad supporters around him. "I'm definitely an over guy when it comes to toilet paper," said the fan who declined to give his name. "I was very surprised at the reaction from my fellow backers. I've been sitting in this section since the stadium opened in 2003, and I go back years with these guys to Veterans Stadium. We go to the shore together, family functions, you name it. I thought I knew them. So I was shocked by how many were under method toilet paper guys. Those bastards razzed me the entire game about it, we had to be separated. For the record--and I love those guys to death--anyone who uses the under method is an a$$hole. Sorry, it's true."
Posted by BroadandMarket No comments: 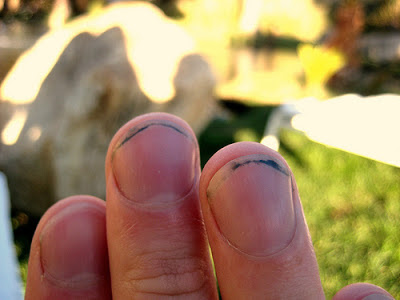 One network executive says they will do anything to get viewers to tune in this week: "When out of bounds is the ocean 50 feet below deck, people will watch. Trust me." Plus, Al Michaels will finally get to use phrase, "That was a hull of a play." 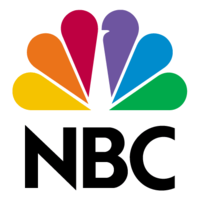 The network's ad instructs interested parties to include "Eagles-Cowboys Barter" in subject line of email. 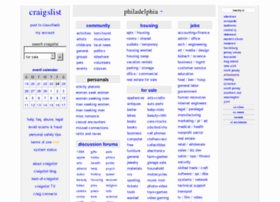 Fallout continues after Joe Buck caught making out with Skycam before, after N.F.L. game 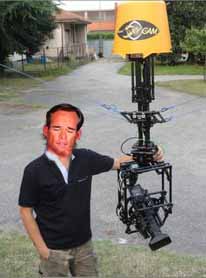 New York City--Fox Sports N.F.L. announcer Joe Buck emphatically denies the incident at the 25-yard line in Detroit's Ford Field last week--despite clear video evidence (yes, from Skycam itself) proving otherwise--saying he's never been a "big fan" of the camera on cables. Fox has suspended Buck and is demanding a direct apology to the network, league, and camera, before being reinstated to the booth. Also, in a very related story, the Fox Robot has asked for an extended leave of absence. Skycam and the Fox Robot were reportedly together, frequently spotted in public, despite the camera's elaborate, confining cable system. Quite often, the two were seen just outside of a restaurant or movie theater, seldom inside ... anywhere.
Posted by BroadandMarket No comments: 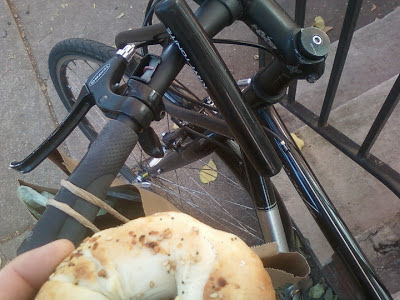 Old City, Philadelphia--Kyle Dyson looks forward to his everything bagels on most weekend mornings, sometimes used to make an egg sandwich or sometimes smothered in cream cheese. Most of the time the middle school math teacher and father of two walks to the nearby coffee shop, but on Saturday he happened to be passing a Whole Foods Market on his bike and decided to make a quick stop for muffins and bagels. The decision to transport the breakfast treats a greater distance in a store paper bag hanging from the handlebars proved costly. "It was a windy morning and the bag kept blowing against the bike. I mean, over and over. Also, my tires had direct hits with potholes, sewer covers, and trolley tracks, it was bad. I just shook my head knowing that most of the mouthwatering toppings that make an everything bagel so good were now at the bottom of the bag," said Dyson, who admitted he should have just purchased a plain bagel because that's basically what he ended up with anyway. "At home, I gathered the loose toppings, lightly wet the bagel, and sprinkled, hoping they would stick. It didn't work." 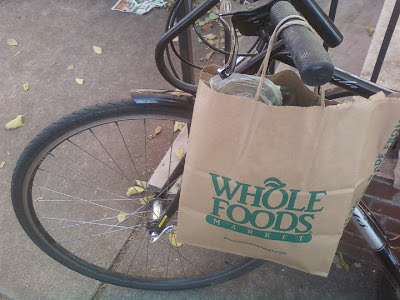 The transit agency and the macro brewery agreed not to hold the sustainability awareness promotion again after all eight horses were run over by the massive rail car while attempting to negotiate a slight downhill grade. 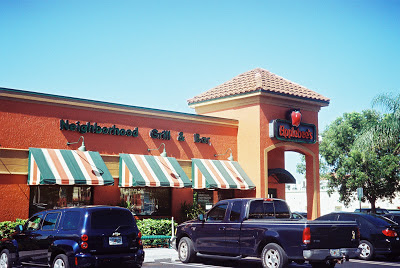 Doral, FL--After a blockbuster trade sent the Miami Marlins' highest paid players to Toronto on Tuesday, those left behind in Florida decided to hold a team meeting in order to gauge overall morale. The gathering was originally planned for Prime One Twelve, a high-priced steakhouse on Ocean Drive in ritzy South Beach that the underperforming team visited often over the long, hot 2012 summer. In fact, the high-end establishment was a favorite of the players that now find themselves on the Blue Jays and who would "almost always" pick up the tab during these expensive outings. For this reason--most likely--the team changed yesterday's meeting spot from South Beach to the Applebee's west of downtown and out past the airport. "I can't believe we're eating out by the airport. 2013 is gonna be a lot different," said one Marlin on condition of anonymity.
Posted by BroadandMarket 1 comment: 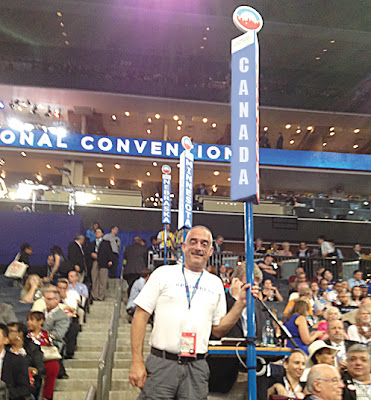 Above: The Canada delegation poses at the Republican National Convention in Tampa, FL, in August. Though not part of the United States, the maple leaf nation attends both the Democratic and Republican conventions every four years. Canada's appearance at the RNC grossly misled the Romney camp, who then reshaped their entire strategy on winning the electoral votes from north of the border. The former Massachusetts governor spent nearly all of October traveling between Toronto, Montreal, Winnipeg, Vancouver, Quebec City, Ottawa, Calgary, Saskatoon, and many small towns in between. "It was a population thing," said a very frustrated Romney. "Canada has 34 million people and California has almost 38 million people. The Sunshine state has fifty-five electoral votes, so, though we never totally researched it, we assumed Canada would have a similar number of votes, somewhere in the neighborhood of fifty. They don't. In fact, they don't have any electoral votes, despite their presence at the Convention. It was very, very misleading, I don't get it. It's not right."
Posted by BroadandMarket No comments: 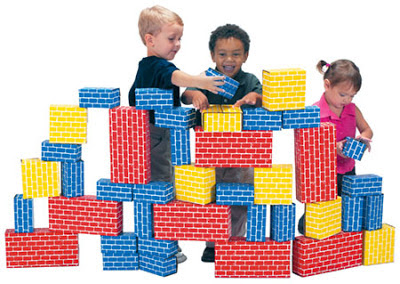 Petraeus: 'I had myself followed, I tapped my own phone. I knew I was up to something and I was going to find out what.' 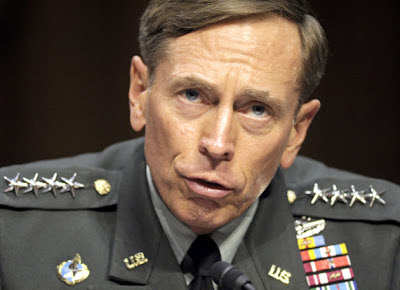 Email ThisBlogThis!Share to TwitterShare to FacebookShare to Pinterest
Labels: politics

College basketball game to be played inside aircraft carrier 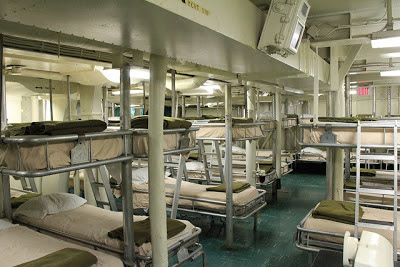 Charleston, S.C.--In an attempt to "out-do" last year's Carrier Classic, a college basketball game played on the deck of an aircraft carrier, the N.C.A.A. has decided to hold this season's game inside the massive, yet very cramped, U.S.S. Yorktown. "Anybody can set up bleachers and a court on the deck of a ship," said Sara Cartwright, the N.C.A.A.'s director of marketing. "But, try playing the game two decks below with the same number of spectators looking on. It's a definitely a challenge. but we love challenges." Because of the tight quarters, some of the ground rules during the game include: bunks are considered in play, low-hanging ducts or pipes are out of play, and dribbling is optional in the mess hall. Also, because the baskets will only be set seven feet off the floor, dunking is not allowed and shots must bounce off the floor before going through the rim. "We are still debating whether or not dribbling will be optional during the entire game."

"I pushed aside the blue curtains of the voting booth, mouth watering, trying to decide in my mind between powdered sugar or glazed, looked at all the tables, looked again, and saw no donuts. Anywhere! I mean, there wasn't even a box of munchkins. Really, no munchkins? C'mon now."
Posted by BroadandMarket No comments: 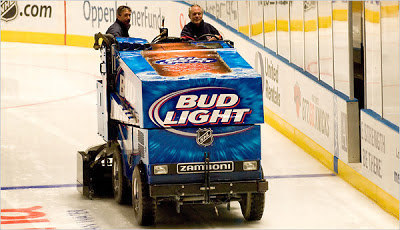 Cliff Cargill, the Zamboni driver for the Flyers for the past eighteen years, has been out of pro hockey work since the lockout began. Fortunately, he has been able to make up for a few of his lost hours on the Wells Fargo Center ice with a part-time job on week nights driving the Zamboni at Gary's Ice Rink & Roll in Lansdowne, Pa, a venue catering to peewee ice hockey games during the week and roller skating on the weekends. (Yes, the patrons attempt to roller skate on ice. It is quite the sight and worth the $20 entrance fee.)

However, most of Cargill's income during the unscheduled break comes from driving a school bus for the School District of Philadelphia.

There's a slight problem, though. Cargill, 53, a South Philadelphia native who has been without a car since he was 20-years-old, has also been without a valid driver's license since that time, too. So, how on earth is Cargill driving a school bus filled with young children?

"Cliff has been a model driver for the District for the past two months," said Dana Halpert, the District's assistant superintendent managing director. "His background is driving on ice, which probably makes him overqualified for the position. Neither Cliff nor the District has committed any wrong doing, as a Zamboni license is an acceptable document verifying proficiency in operating a motor vehicle."

That is correct. The public transit- and bicycle-dependent Cargill, who has not driven an automobile in nearly thirty-three years, secured the bus driving job with a Zamboni license. A Zamboni license! The district was dangerously short on drivers this school year and allowed Cargill to use the "ice license" in place of an automobile license, which is permitted by the District and by the Commonwealth of Pennsylvania.

It must be noted that Zamboni licenses are not distributed in cereal boxes or found at the bottom of Pringles cans, as the process to certification is rigorous and must be renewed every eighteen months at the Zamboni Academy and Research Institute in Toronto, Canada. The initial exam consists of an intense ten-hour multiple choice, essay, and short-answer computer test, followed by a six-hour behind-the-wheel hands-on test. The renewal is five hours and three hours, respectively.

"I can do circles no problem," laughed the father of three, who literally drove a bus in circles in the vast parking lots at the South Philadelphia Sports Complex to prepare for the job. "My bus route is mostly circular, but when I have to make a right and then a left--or vice versa--I get somewhat disoriented. But, I'm working on that."

Cargill also says he gets very anxious and disappointed when he drives over pot holes with the bus, looks in the rear-view or side-view mirror, and sees that the pot hole is still there. "That's one part of the job I don't think I'll ever get used to. The Zamboni takes care of all ice 'pot holes.'"

Parents of the school children riding the bus have, for the most part, supported the driver despite the lack of hours behind the wheel of the big yellow bus. "I'm a big Flyers fan, I mean, huge. I have all orange and black in my row house windows. So, if I get to tell my friends and family that the Zamboni driver for the Flyers takes my kid to school, than I'm not too concerned about what kind of experience he's got," said Donna Scioli of Shunk Street, wearing an autographed Jaromir Jagr jersey.
Posted by BroadandMarket No comments: 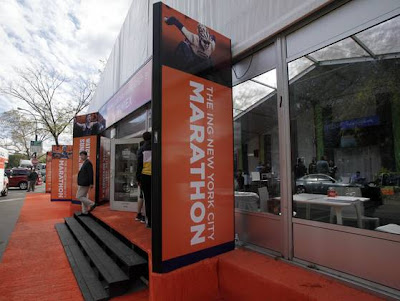