Metrodome Collapse: Favre missing, Vikings say QB could be under pile of snow, will check later in week 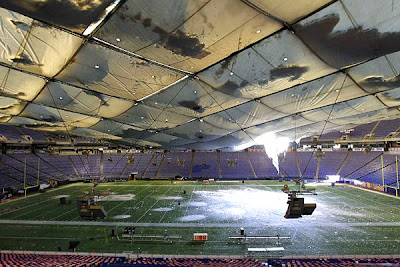 Minneapolis, MN--Vikings' quarterback Brett Favre, 41, has been missing since early yesterday morning. The Mississippi native disappeared around the same time that the team's stadium, the Hubert H. Humphrey Metrodome, sustained a roof collapse at around 5 a.m. from excessive snow that accumulated from a recent harsh winter storm. There have been reports that Favre received a text message asking the quarterback to come to the Metrodome field alone at 4:45 a.m. and wait by the north 40-yard line. Police would not comment on this report. The team and Minneapolis emergency officials say they will check the mound of snow on the field for the 20-year veteran later in the week. "We have reason to believe that Brett may be at the bottom of the snow pile on the field ... and, miraculously, alive," said Minnesota emergency medical technician, Harry Dolombach. "We will definitely search later in the week. No later than Friday or Saturday, I promise. At that point it will probably be a recovery mission and no longer a search and rescue mission."